Andy Watt is a Cheltenham based artist who taught art for many years and, although he enjoyed teaching, finally wanted to do his own thing. Andy is know for his colourful abstract landscapes and before doing a practical demonstration talked about the inspirations that have influenced his work. Andy trained at Winchester School of Art under the guidance of Gillian Ayres, who was best known for abstract painting and printmaking using vibrant colours, which earned her a Turner Prize nomination. After art school he trained as a teacher and spent over 24 years as an art teacher, mostly at Cheltenham Ladies College.

Andy took us through a wide range of diverse artists who had influenced his approach to painting. There were too many to record here but included Matisse with his love of colour, portraits done blindfold by Paul Heath, the skin tones of Rembrandt, Ken Howard and his use of brushstrokes, John Virtue who created great atmosphere with a limited palette, Turner’s watercolour sketchbook and Willem de Kooning who introduced him to a new set of colours. One of the most surprising examples was the delicate watercolour painting of flowers by Piet Mondrian, so different from his famous geometric grids of primary colours. There were many other influences and Andy had clearly found it a challenge to limit the list to a manageable number. The main theme from all the influences he described was colour.

Andy then showed us a number of examples of his own work and made links with the art work that had influenced his development. He explained that he took the landscape as a starting point, not to copy what was there, but to play with the composition and enjoy the paint. He was not a purist regarding materials and would use anything to hand that worked. For his demonstration he used an existing composition based on a footpath in the Lake District, which he had originally sketched on location. He actually did two versions of this composition side by side, one sketched out using a sharp stick dipped in ink and the other using charcoal. The charcoal was in the form of ‘sketch sticks’ a compressed form of charcoal. 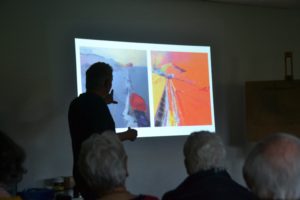 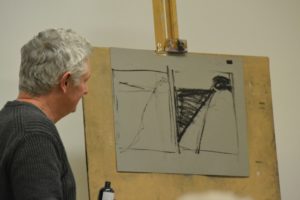 Andy clearly liked his painting to be unpredictable and he experimented with applying different paints, inks, colours and means of application. He explained that his colour choices were instinctive and he had no preconceived idea of the outcome. His approach was reactive and the nature of the work would keep changing and developing until he obtained something that he felt worked and was balanced. 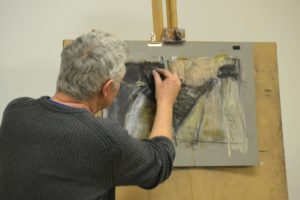 Andy provided an entertaining and thought provoking talk, with an informative description of his many influences and how they relate to his current work. Andy’s work can currently be seen at Burford Garden Centre and he will be at the Gardens Gallery 25 – 31 March.