Mike Duckering can’t remember a time when he didn’t paint. However, he recognised the need to earn a living and trained as an architect. He became a full time artist when he retired and obtained a BA Hons in Fine Art from the University of Gloucestershire. He has been based at the Lansdown Art Studios in Cheltenham since 2013. He often does additional art courses to keep fresh with new ideas and techniques. He normally works in oils and develops his work over several stages. For the demonstration this wouldn’t be practical so Mike was working with acrylic paint. 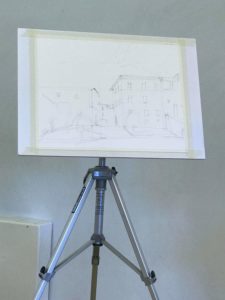 Mike explained that all his work starts with a subject, even if it is an abstract work. He starts outside and produces sketches which he can then use to develop his paintings. He commented that he finds photographs limiting as they do not provide the same feel or detail of a place. His process involves an initial sketch which is then blocked in with a brush to confirm the basic composition and colours. He then works in layers of oil paint with a palette knife. At each stage he will reassess the picture scrapping off some of the previous layer of paint and applying more. His pictures can involve several layers developed in this way and the final result may bear little or no resemblance to the starting point. He referred to the artist Frank Auerbach who was famous for the large numbers of paint layers that he used and was quoted as saying ‘to produce a great painting you have to destroy a good one’. He made the point a few times that ‘composition is everything’ and it doesn’t matter how god the technical work is if the picture doesn’t work. 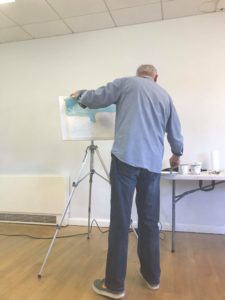 Mike has just been painting in the Marche region of Italy with Devon based artist James Tatum. As the subject of his demonstration he used a sketch done in the main piazza of the village where they were staying. Mike was using Liquidtex acrylic paints and using a large brush blocked in the sky with ‘light permanent blue’. For the buildings he used unbleached titanium which provides a light neutral colour and added naples yellow where he wanted a warmer colour. He also likes a colour called ‘parchment’. He noted that he avoided green wherever possible, like many finding it a difficult colour to work with. The green in this picture was mixed using ultramarine and cadmium yellow. The darker areas and shades were done with a mixture of ultramarine and raw umber. 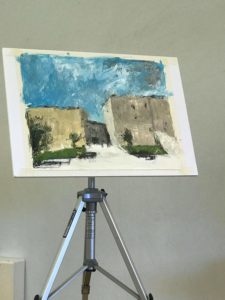 Once the painting was blocked in by brush Mike moved on to using a palette knife. Using a palette knife means he is less able to fiddle and add details. He tries to separate himself from the original image and focus on the painting and it’s composition. He is not bothered about accurately representing the original scene. He noted that the brain is very good at working out what things are and you don’t need to provide a lot of detail. Mike worked on the picture showing how he used the palette knife and gradually developed the image to convey the feel of the location.

Mike provided a fascinating insight into his approach to painting and the process he has developed focussed on the perception of places and his visual interpretation of how they feel. 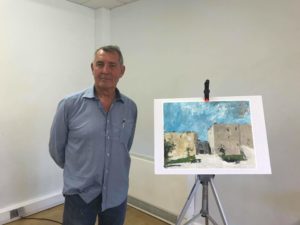 More information can be found at www.mikeduckering.co.uk