This month’s demonstration was provided by Richard Webb of ‘Handcut Originals’. Richard is based near Worcester and produces art based on paper cuts, collage and mixed media. He started by providing an overview of his background and how his current work involving paper cuts developed. He described growing up, drawing as a child and developing an interest in art. At art college he studied graphic design and by profession he is a freelance graphic designer. His work on paper cuts started 5 years ago when his wife, who liked a picture he had done of an apple tree, encouraged him to do produce some more work and show it at the local Applefest event. He was pleasantly surprised at how well these sold and encouraged him to develop this art form further. He now regularly does art and craft events and displays his work in galleries.

Richard then showed us a number of examples of his work. This illustrated how he was gradually developing his range of work using different materials and techniques. The examples included 3D effects with different layers of card, various types and colour of card and a range of different subjects. Some work involved the use of copper sheet which could be burnished and heat treated to produce different effects. The cooper was coated with a lacquer to prevent tarnishing. As he develops his method he is starting to experiment with other materials such as galvanised sheet and brushed steel. He described his influences which ranged from wood cuts, lino cuts, 40s/50s retro style and art deco. All his work displayed a strong design with simple, iconic images. 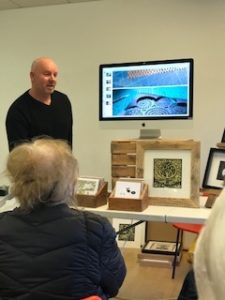 Richard then took his through his process for producing his art works and his tools of the trade. His key tool is a scalpel knife with a 10A blade. He emphasised the need to always use a sharp blade and be careful with the knife! He stepped through the stages in producing a picture. He starts by sketching the basic design, which needs to be a continuous line which can be cut out in one piece. From the sketch he produces a template which is used to cut out the card. In general he draws the template on his computer so that the image is then available for multiple uses. Generally he uses 170g card which is available in a wide range of colours. The image is built up by cutting each element in from the chosen colour card and then assembled to create the overall image, each piece being glued in place. 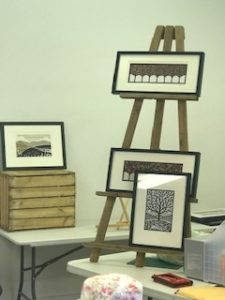 Richard emphasised that the overall process is quite simple but clearly needs a great deal of care and patience, especially for the more complex pieces. Key to it’s success is the strength of the eye catching designs. Richard also showed us examples of the many potential spin offs such as mugs, coasters, tea towels and cards. 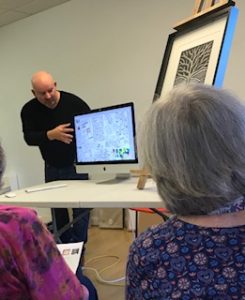